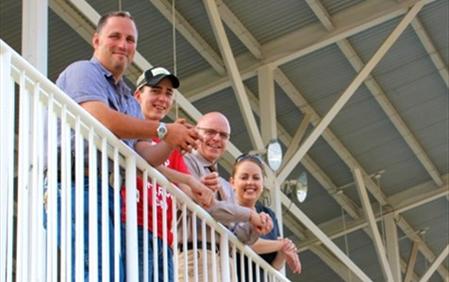 One of Ontario's largest Fall Fairs

A show of hands if you attended the New Hamburg Fall Fair as a kid. Keeping childhood memories alive is a primary reason members of the Wilmot Agricultural Society work diligently to present the iconic event every year.

This year the fair is 161 years old. That makes it the second oldest consecutively-running fair in the province. The 2015 fall fair will celebrate 100 years of 4H Clubs in Ontario and that milestone is the theme of the weekend.

That long history of community building continues in the core group that now runs the fair, as well as in the many volunteers who take a few hours to help over the weekend.

Director, Spencer Hammond, puts it in perspective. “A handful of farmers started it who were busier than us putting food on their table. If they pulled it off, so should we.”

Volunteers are the oil that runs the fair machine and the group welcomes new ones right up to the day of the fair.

Stephanie Szusz, first vice, emphasizes that helping with fair doesn’t have to be such a big commitment: “We try to find out what people are interested in helping with and then make it fun and social. You can take as much on or as little as three hours at the gate to keep this fair going.”

“If it was not for the township [people], there wouldn’t be a fair. They build it in a weekend,” adds second vice-president Nathan Leis. The youngest board member is currently 16 years old. Other members’ ages range up to over 65 years. This keeps the group young, vital and full of new ideas like the Team Sorting event this year. Team Sorting is a rodeo-style sport where three horseback wranglers sort cattle out of a herd in the shortest amount of time. That will go Friday night at the grandstand.

The Burg’s Got Talent is also new this year and will be searching out the area’s best entertainers. The Wilmot Youth Action Council is starting an air band competition with performances on Saturday. A new and improved children’s area, called The Barn Yard, will feature face painting, a painting wall, and a frog jump.

The over-arching mandate is to present a family-centred event that showcases local talent with an agricultural focus. At the same time the fair allows urban folk to have an agricultural experience — maybe at the petting zoo or by growing and entering a vegetable into competition.

“I am from a farm and being passionate about agriculture, I wanted people who are removed from it to understand where their food comes from,” president Ben Broughton explains.

Education around food production was underlined a few years ago when one young visitor absolutely insisted that chocolate milk came from brown cows.

The New Hamburg Fall Fair is one of three Ontario fairs that is alcohol free. Resisting the temptation of profits from a beer tent, the Wilmot Society chooses a more family friendly atmosphere.

Szusz relates her family experience: “I have never missed a fall fair in my life — literally. I was born in April and I was put in the baby show the following September. I want my kids to enjoy it too, so I volunteer.”

Hammond concurs. “My wife and kids just moved here a couple of years ago and asked what could we do to be part of the community. I saw a need and wanted to help. Our heart, and sometimes tired bodies, are completely in this for the families. It’s great to be part of a larger family too,” he said.

The fair has long been a meeting place. From farmers taking time off to compare notes to locals catching up on news. A recent survey of fair goers asked the question, ‘Why do you come to the fair?’ The overwhelming answer was, ‘We always come here.’ Obviously, tradition is a big part of the New Hamburg Fall Fair’s charm.

Szuzs sums it up, “You don’t get to be 161 years old without the people who’ve put years into the fair before this present board. I am so thankful for the volunteers that worked years before us. Come out and enjoy the fair. We’re excited to have everyone take in what we’ve planned. You can meet your friends and talk the old fashion way. It is true social interaction.”